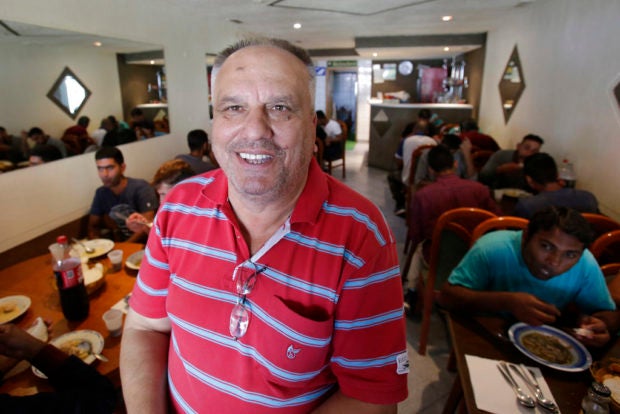 In this photo taken on June. 10, 2018, Bosnian Asim Latic poses for a photo inside his restaurant during lunch where he serves meals for migrants, in Velika Kladusa, 400 kilometers north west of Bosnian capital of Sarajevo. AP

VELIKA KLADUSA, Bosnia-Herzegovina  — When Asim Latic saw a migrant sitting outside his restaurant on a cold and rainy day last winter, he didn’t think twice before he invited the man in and offered him a meal. And he has been doing the same ever since.

The restaurant owner from northwestern Bosnia in February closed his pizzeria to regular diners and is now serving only free meals to migrants passing through the Balkan nation while trying to reach Western Europe.

Latic’s Teferic — “picnic” — pizzeria in Velika Kladusa has given out some 36,000 meals to the migrants who have flocked to Bosnia while trying to avoid more heavily guarded routes through the Balkans.

Latic’s move illustrates efforts by many in Bosnia — who themselves went through a bloody ethnic conflict in the 1990s — to help people fleeing war and poverty in their own countries.

“I am not alone, people are helping,” Latic said. “I haven’t had any help from the (Bosnian) institutions, not a cent.”

Bosnian authorities have struggled with the influx of thousands of people from the Middle East, Africa or Asia. Migrants travel from Greece to Albania or Macedonia and move on to Serbia and Montenegro before going into Bosnia.

Many migrants move to Bosnia’s northwestern corner, where they try to cross the border into European Union member Croatia. From Croatia, migrants hope to move on to Slovenia and further West.

In Velika Kladusa, hundreds have been sleeping in makeshift tent camps on several locations. Aid groups have provided food and other assistance to the migrants, many of whom are families with children.

In nearby Bihac, authorities have allocated a former student home that was ruined in the 1992-95 war to temporarily house migrants. An official asylum center has opened in southwestern Bosnia.

Latic said that his restaurant gives out 400-500 meals a day. During the month of Ramadan, the restaurant has also been offering an evening meal, in keeping with the Muslim religious tradition.

At a nearby tent camp, another citizen of Kladusa, Emin Okanovic, drove up with a trunk full of bread and other food that he handed out to the migrants.

“I have lived that; I was a refugee, I know what it means,” Okanovic said, his eyes filling with tears. “These people are poor, they fled carrying nothing but one bag.” /ee