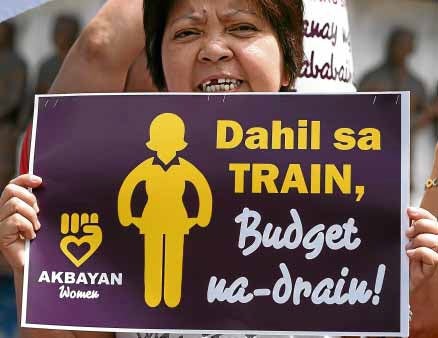 SHRINKING BUDGET A protester joins a rally in March blaming the TRAIN Act for rising prices of goods.—NIÑO JESUS ORBETA

The chair of the Senate ways and means committee expressed misgivings on Tuesday about the wisdom of lowering the 12-percent value-added tax (VAT) to 10 percent.

“Proposals for a lower VAT are well-intentioned but perhaps we have to also consider the people’s many needs,” Sen. Sonny Angara said in a text message.

He said he was worried about potential lost revenues that would otherwise go to important public services like “universal health care, free college tuition, infrastructure [that is] badly needed like airports to improve tourism, subways to decongest traffic, trains to bring people and goods.”

Angara was reacting to the suggestion of Senate President Vicente Sotto III to reduce consumption tax in the proposed second installment of the Duterte administration’s tax reform package.

Sotto mentioned the decrease in VAT as a possible countermeasure to rocketing inflation that had been blamed by critics on the Tax Reform for Acceleration and Inclusion (TRAIN) Act, which raised excise on fuel and a host of other goods and services and rationalized personal income taxes.

In May, inflation rose to a five-year high of 4.6 percent, fueling calls for the suspension of the TRAIN law.
Economic managers, however, said the TRAIN law had only a minimal effect on the rise in prices of basic commodities, arguing that other external forces were in play.

“If this [suspending the excise on fuels] is not viable, then we can take up TRAIN 2 and amend it. For example, we can lower the VAT…under TRAIN 2, because there were things [in the first TRAIN] that we were not able to take up and which we can take up now,” Sotto said in Filipino.

Sen. Panfilo Lacson, who voted against the TRAIN Act, earlier proposed lowering the consumption tax to 10 percent as well as reducing the number of exemptions from VAT, which stood at 143, instead of raising excise on fuel.

He reiterated that call last month, saying he might file a new bill to that effect after consultations with the Department of Finance.

Read Next
Rains kept jobless from Dole fairs
EDITORS' PICK
Acer starts the year off strong with the Aspire Vero National Geographic Edition
The best of bayside and city living at SMDC’s Sail Residences
EDITORIAL: Protecting the polls’ integrity
COVID-19 virus spread slowing down in Metro Manila, says OCTA Research
Over 3 Million worth of prizes to be won at Smart Padala’s SENDali Manalo Promo!
Comelec junks petition to scrap Bongbong Marcos COC
MOST READ
In Batanes, octogenarian dies of COVID-19
Drug lord Espinosa tried to escape through air vent at detention facility – NBI
When to get boosters after positive COVID test
Marcos Jr. visits Cebu, stands as ‘ninong’ to mayor’s son
Don't miss out on the latest news and information.