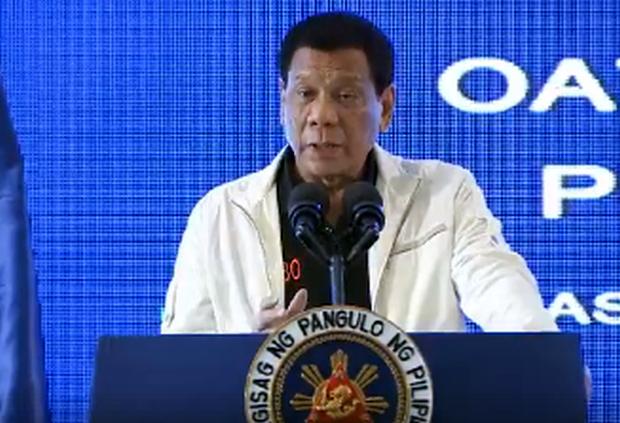 President Rodrigo Duterte speaks at the oath-taking ceremonies of around 3,100 newly elected barangay chiefs of Central Luzon at the Dialogue for Barangay Good Governance at the ASEAN Convention Center in Clark Freeport Zone, Pampanga, on Tuesday, June 12, 2018. (Photo from an RTVM video)

CLARK FREEPORT ZONE, Pampanga — Once rehabilitation of Boracay Island is complete, President Rodrigo Duterte wants to distribute the land to the locals so that they can sell it to big businesses if they wish.

In a speech on Tuesday afternoon, the President said he would want the locals of the popular tourist destination to possibly earn big bucks in the future.

“I want to give it to the natives, so by the time that big businesses will begin to go in, the locals already possess the land title and they can sell it. My consolation is that they will be able to handle money,” he said in Filipino.

He added: “One day, should you sell it, maybe your daughters and sons will reap at least a little money, even for a moment. It won’t last for long but that’s the way how I think about things.”

The President made the remarks before an audience of newly-elected barangay captains in Central Luzon.

He led the oath-taking of the barangay officials at the ASEAN Convention Center here.

He previously reiterated that his intention for Boracay once its rehabilitation had been completed was to give it away to the people by placing it under a land reform program.

Boracay, a popular tourist destination, was closed last April 26 for a six-month clean-up and environmental rehabilitation.

Earlier, the President said he would want Boracay to be used only as an agricultural and forestal land, and that he would not want a residential or commercial area to rise on the island.

“I will not give it to the big businesses, because Boracay can take only so much waste even with an improved sewerage because of the sheer volume,” he explained on Tuesday.

He reiterated that he would leave it up to Congress to create a 30-meter easement or strip, while the rest of the island should be given to the people.

“They might want to consider it as a commercial area, because [former] President [Gloria Macapagal] Arroyo and I never signed any proclamation to change the whole thing. It remains to be a forest and agriculture land,” the President said.

He noted that even with the redistribution of the land to the locals, it was inevitable that the locals would sell their land to businesses to make a profit.

“Eventually because of money, they’d sell. Especially if we’re no longer around. I will give the land to the natives now by way of land reform. In time, there will be resorts established again there,” he said.

This, he pointed out, was one of the reasons why land reform efforts in Mindanao failed.

“The land reform in Mindanao failed, why? Because eventually they sell it. They say land reform is inutile, it never succeeded. If you don’t have capital and government is not there all the time, it will really fail, the enterprise of agriculture,” the President said.

“Do not intervene there because we are in a process of just cleaning,” he said. “After it is cleaned and there’s hygiene improvements, I will return it to the people.” /atm